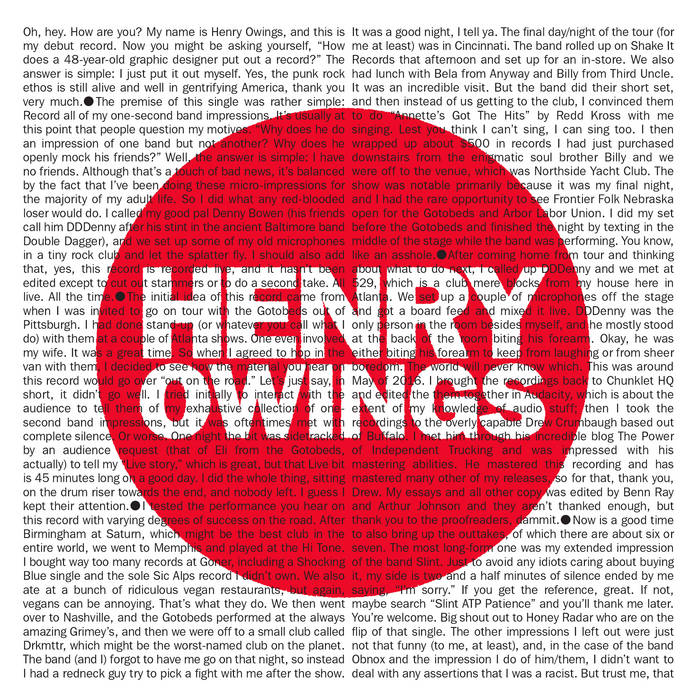 Supervisor of the Loveless Average

Want this release on cassette, 3" CD or (gasp!) Mini-Disc? Go over to:
store.thirduncle.com/album/micro-impressions-volume-1

Do you think about how much you miss Chunklet? Do you ever wish you could have that snarky voice of its publisher.....in vinyl form? Well, look no further, my friend!

Records have been pressed for close to a century, and now "Micro Impressions Vol. 1" shows that literally anybody can put one of these damned things out. Recorded live to nobody at 529 in Atlanta, Chunklet's benevolent potentate rewards the listener with several dozen of his one second band impressions. Do you know what that means? Can you be bothered to care? Either way, this record exists. So shut it.

Even the 30" long sleeve is worthy of framing! Designed by Nolen Strals (Post Typography), Owings asked all of his "friends" to review this release and all the reviews are included. "Why hadn't anybody thought of this before?," you might ask? Probably just too stupid.

Here's two completely differing reviews which, let's be honest, will show why this record exists in the physical realm.

"With Chunklet, whether we’re talking the publication, record label, or, um, enterprise, you know there’s always gonna be a twist at some point, which is testimony to Chunklet majordomo Henry Owings’s oftentimes twisted outlook on life. He’s now expanded his purview to stand-up comedy under the nom du jest H20, and his first project is a live recording of him doing one-second impressions of bands, some iconic, some not-so, and some so underground that their sendups are way-inside jokes. Each impression is spot-on in its own way, however, and if you find yourself scratching your head over one that goes over your head, never fear—in about a second, you’ll be laughing your ass off so hard that you’ll drown out the next three portrayals.

Side A kicks off with his one-second take on Melt-Banana, a succinct squeaky-voiced ‘Thank you!,’ but before you have a chance to process it (I made a mental note to go pull out all my Melt-Banana records and live tapes later to determine the exact source of Owings’s inspiration), you’re knee-deep in U2 (a kind of moan that’s equal parts heavenly passion and a particularly satisfying bowel movement), the Red Hot Chili Peppers (a rapid-fire shout of ‘Give it away!’ with the second half of ‘away’ clipped off), the Fall (‘maaan-uh’), and Joy Division (‘radio’ delivered in an impossible baritone that’s so perfect I can imagine Peter Hook ringing Owings up the next time he decides to tour a Joy Division album). Yeah, I was indeed cracking up by this point, and we’re only about 45 seconds into it.

The final impression on side A has Owings acknowledging up front that it will run longer than a second, and then you hear the presumed sound of Cat Power’s Chan Marshall sobbing quietly and inconsolably into the mic as the track spirals to its conclusion. Brutal, bruh. (Earlier he also does a six-second Shipping News, similarly breaking his one-second rule. Sorry, you’ll have to buy the record to find out what the impression sounds like.)

Flip the single, and the lunacy continues, with takedown after takedown, from Fugazi, Mastodon, and Prince, to Trans Am, Blonde Redhead, and Man…or Astro-Man?, plus three special impressions clearly dear to Owings’s black little heart. There’s AC/DC, done twice (you guessed it: Bon Scott followed by Brian Johnson). There’s also one he calls ‘The Trilogy,’ which features White Zombie and Metallica sounding appropriately hostile/aggressive, plus The Nineties (‘yup!’ — one of the aforementioned head-scratchers, as I wasn’t sure if he means The Nineties the band, and if so, we’re talking really obscure, as I can only find a lone Bandcamp page for anyone called The Nineties, or the decade. Take your pick!) And then there’s another trilogy of sorts, Smashing Pumpkins followed by Courtney Love followed by Nirvana, and if you’ve ever wondered to yourself if you’re the only person who thinks those three artists are musically interchangeable, rest assured there’s at least one stand-up comedian out there who agrees with you.

Bottom line: ‘Micro-Impressions, Volume 1’ is a must-spin at any party you and your hipster friends decide to crash, potentially the next Trivial Pursuit–like social gathering craze. In fact, I’m starting to get the itch myself . . . wanna hear my Ian Anderson, David Lowery, and Brian Jones impressions? Memo to self: work on perfecting my underwater gurgling sound."
–Fred Mills

"There’s a drinking game of sorts whose potential breadth of hilarity is only limited by your musical knowledge. That and liking Fugazi. The game is essentially called ‘Guy Picciotto Sings.’ In G.P.S., the participants sing songs of other bands in the style of Guy Picciotto’s distinctive voice. If you play the game in a room full of music snobs, then singing ‘What about the voice of Geddy Lee, AH-HAA, how did it get so high, YEAH-HAW,’ you might get some chuckles. However, if you play it in a room with people who know nothing of Fugazi, Pavement, or HOLY SHIT, THE DAM HAS BUSTED Rush, then you got nothing. On his debut single, ‘Micro-Impressions, Volume 1’ writer, graphic designer, and Chunklet publisher Henry Owings dispenses with over thirty one-second band impressions from groups as obscure as Shipping News and Battles to ubiquitous as the Rolling Stones and AC/DC (twice!). While the intention behind this release should be taken into consideration, be it irony or intentional mediocrity, the results are like a round of Guy Picciotto Sings. It’s only as funny as the listener’s knowledge of Owings’s targets. Did you know that Melt-Banana vocalist Yasuko says a quick ‘Thank you’ after most songs when played live? Did you know that Cat Power vocalist Chan Marshall has a history of breaking down in tears in the middle of her concerts? Even when the answer to those questions is ‘YES,’ the results are only likely to elicit an occasional smirk rather than full-on laughter. Part of the problem and limitations with ‘Micro-Impressions, Volume 1’ isn’t the content but the expectations of the format that it came out on. While singing a droll, laconic ‘RADIO’ as a one-second impression of Joy Division might be ‘bar funny,’ when you actually commit it to tape and listen to it cold, the charm fades. Like Guy Picciotto singing the songs of GG Allin, ‘Micro-Impressions’ might be funny with a shot of Fireball, but with a bowl of bran cereal, it’s lacking."
–David Lichius