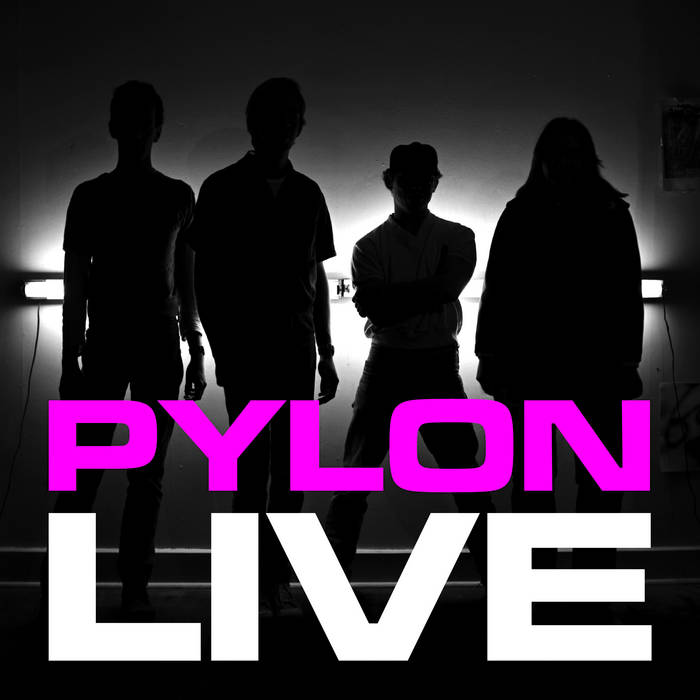 jumpinpunkins Was fortunate enough to catch them at the 40 Watt in 1991 and be dazzled. One of the great bands that is loved by the bands you love, as they say. This is a marvelous, clear recording and a welcome addition to their (too) small discography. No Clocks, K, Stop It, M Train...

Ellen I consider myself lucky to have seen Pylon play City Gardens in Trenton, NJ, back in 1989 during one of their active periods. This live album is as close to time travel as it gets.

Earthdog70 Pylon rules! No question. Thanks to the band for putting this out. Favorite track: Stop It (live).

This is a double album of the first last show by Athens, Georgia band Pylon.
I first discovered them through my love of R.E.M. and reading an article with an interview with Peter Buck. He was talking about “Radio Free Europe” and the time it came out as a single. That same day Pylon put our their song “Crazy.” He was crushed. He felt they were so much better than his band who were then the darlings of every music critic in the industry.
I was completely intrigued by this. A band who R.E.M. consider better? What kind of heresy is this?
I had to find out.

A trip to the Theory Shop at Jacksonville Beach I was rewarded to find a cassette of Chomp. I quickly loaded into my player in my car and took a drive.
What happened next would be my introduction to No Wave Art Rock heaven. A Southern Band not being lead by guitars??? How was this possible??? Yes Michael Lachowski truly leads the music of Pylon. The bass is right up front, thunderous, driving, and danceable. This was unheard of to me a young man who was born and raised in the same town as Skynard and Hatchet.

Vanessa Briscoe Hay’s vocals hit you like an Ali punch to the jaw. Strong and direct. She lets you know she is a strong woman who belongs on a stage. She can hold her own with any male musician.

I would nearly wear out my tape in the first few months of owning it. Trying desperately to convince my friends that this band deserved much more attention and also air play on the local stations. Something I could sadly not remedy.
A few months later I would have my chance to see them live In concert.
The now legendary venue Einstein a Go-Go had them booked. I could not wait for the show. The true test for me has always been to see a band live. Could they bring this sound and attitude across on stage? Or was I being fooled by studio tricks?

Needless to say I was not disappointed. Twice in my life I was able to see Pylon live and both times they sounded better live than on tape. One of the few bands I know of that I can truly say that.

Fast forward to 2016. Doing a radio show of my own in Boise, Idaho I read on Pylon’s page that a live double album is being released. I must own this! A gift from my now wife and partner in life. For years I have been telling people of the magic this band had live. Forget the other Athens bands this was the real gem of the era.

The album is beautifully presented on hot pink vinyl. A gatefold with a fantastic shot of the band live on stage.
It is a document and recording of the first time the band had played a last show on December 1, 1983.
Having decided to go back to being normal humans again. This album brings you the experience of this band in its prime. Giving their all to their hometown crowd for what they feel will be their final show.

The band would reform again in a few years after the release of Athens Ga Inside Out and R.E.M. covering their song Crazy on Dead Letter Office.

For those who only have heard of Pylon and never had the chance to see them do yourself a favor a find this gem. Listen to band that was better on stage than in the studio.

I treasure this album as an anchor to my youth and to my southern roots. Knowing that this example of southern culture represents art and danceable music without having to be a jerk about it. (written by Robert Bryan James)

Art Fin Coming out of Athens, Georgia at roughly same time as the B-52's and R.E.M. (who covered their song "Crazy"), this band was less commercially successful but no less important. Their raw, sparse, rhythmic sound was fronted by nonconformist, yelping vocals. It's ironic that their 1979 song "Cool" was used in a 2016 TV commercial for Lexus cars and that's probably the widest exposure the band ever received in their 37-year history. Live video from 1980: www.youtube.com/watch?v=U-HoIQkxSIM

ihatemyusername A joyous concert recording. They played with humor and verve. I miss Pylon! Favorite track: No Clocks (live).

"Pylon is still my favorite Athens band, in fact, one of my favorite bands!"
-Fred Schneider, The B-52s


1983 was a banner year for Pylon. The Athens quartet released their second album, Chomp, on Atlanta-based DB Records, toured the country extensively, and played several opening slots for then-up-and-comers U2. And then, without a hint of explanation, they quit.

Their final show at the Mad Hatter in Athens, Georgia, was, as was always the case, a frenzy of minimal disco thud, post-punk guitar scree, and deliriously inspired howl. Oh, and dancing — always dancing — both in the crowd and on stage. The gig was recorded (both audio and video) for a failed PBS pilot called Athens Shows, and the tapes were put away and forgotten. That is, until now.

Around three years ago, after Pylon’s DFA reissues hit the street, Chunklet CEO (and card-carrying member of the Pylon Fan Club) Henry Owings emailed the band bemoaning the lack of bonus material on the CDs, which sparked a larger conversation. “My favorite Pylon is live Pylon,” said bassist Michael Lachowski, with which Henry wholeheartedly agreed. Following a cordial sit-down at Michael’s apartment over the New Year’s holiday of 2015, an exhaustive search began for live recordings by Pylon. More specifically, live recordings from Athens in the early ’80s. Oh, and that sounded as good, if not better, than their proper full-length albums.

Numerous dead ends followed, but finally, and somewhat fittingly, the multitrack recordings of Pylon’s final performance at the Mad Hatter in 1983 were unearthed. Once the tapes were transferred and subsequently mixed, the explosive and compelling sounds raised one very significant question: Why in the world did Pylon quit?

For a band whose legacy, in their original incarnation at least, was two full-length albums and a handful of singles, Pylon were first and foremost a live band who weren’t as interested in working in a studio. Pylon’s raison d’être was performing for a crowd, and now there’s conclusive validation.

Pylon Live is a double vinyl album recorded on the band’s home turf at the culmination of their powers, and the results could not be more stellar. An all killer, no filler set with nothing left on the cutting room floor, Pylon Live includes powerful versions of the Pylon canon from their first and second LPs and even the hard-to-find song “Party Zone” (previously available only on a DB Rec comp) and their never-before-released rendition of the “Batman Theme.”

When compared to the band’s prior body of work, Pylon Live bookends all of it; some might even say it’s a better representation of this Athens quartet, who thrived on bouncing around on stage infinitely more than sitting in a studio.

There’s little arguing that the Athens powerhouse trifecta of R.E.M., the B-52’s, and Pylon is peerless. And while all three bands have achieved great critical acclaim, only the first two had the commercial acclaim they deserved. Pylon Live intends to correct that.

Pylon Live is being released on July 25, 2016, the birthday of deceased Pylon guitarist Randy Bewley, with release events scheduled for this summer in Atlanta and Athens.

Pylon Live is for sale at chunklet.bandcamp.com.

Limited to 217 on magenta vinyl.
Limited to 312 on clear vinyl.
Unlimited on black vinyl.

SIDE C
Danger
Reptiles
Stop It
Feast On My Heart
Beep