Live at the EARL

by Black To Comm 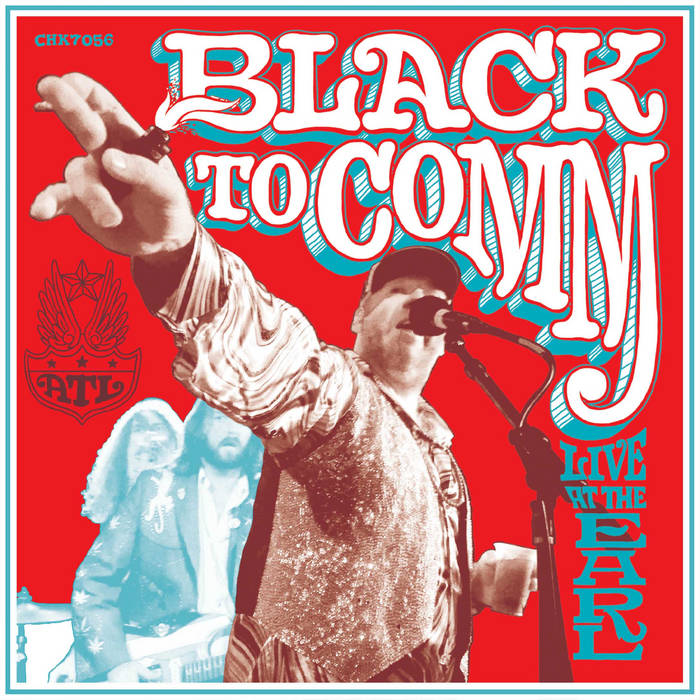 I had a gigantic four-day blowout for my 50th birthday a couple years ago. Apropos of nothing, I contacted Wayne Kramer to see if he’d come and perform again with the Atlanta backing band from a couple years prior. Wayne responded almost immediately saying that he was beyond flattered that I asked, but that he’d be celebrating his own 50th anniversary of “Kick Out The Jams” around the world. So without giving it a second thought, I asked the guys (Adam, Shannon and Adam, or as I call them The Three Adams) if they’d play some MC5 songs and let me sing. You know, let the birthday boy have some. Without a second hesitation, they all said yes. “Twist my arm,” said Adam McIntyre. My goal was to just hear “Black To Comm” live. Just to hear the riff on repeat and smoke a joint in the front row while it just goes on a loop. I should also add we got Van Bassman from the Buzzards of Fuzz to join us on second guitar filling the roll of Fred Smith.
We opened with “Ramblin Rose” with McIntyre singing. Then, me with my absolutely hoarse voice from three days of partying at my 50th birthday behind me, we went into “Kick Out The Jams.” Then we did the rather obscure MC5 song “Gold” which they wrote for a movie towards the end of their career. I played toy piano. Then we did “Rocket Reducer (Rama Lama Fa Fa)” which was a heckuva lotta fun to do. Then we closed with “Black To Comm.” Before we started, I offered to get the entire crowd in for free to the 86 show that had just started down the street at 529 after we were done playing. About half way through the 12 minute song, I burned a jay at the front of the stage just as I had promised I’d do. Happy birthday, Henry. Five songs. Always leave them wanting less. As time has gone on, various people whose opinions I respect have told me how much fun they had at our show. Oh, did I mention it was the first time I was actually in the full time role of singer for a band? I guess I should have mentioned that before now. But yeah, I had never sung with a band before. But you know what? Once I was singing in front of them, I understood every last bit of instruction that Wayne gave me for his backing band when he came down a couple years earlier. Get the best drummer possible with a bass player that can play along. The rest is rock and roll. It was my first time “controlling” a band, and let me tell you, it was a helluva lot of fun. If you ever get the chance to sing MC5 songs on your 50th birthday, I highly highly recommend it.
--Henry Owings (aka the birthday boy)

A Chunklet Industries Release
All Rights Reserved
Manufactured and Assembled in U.S.A.
CHK7056