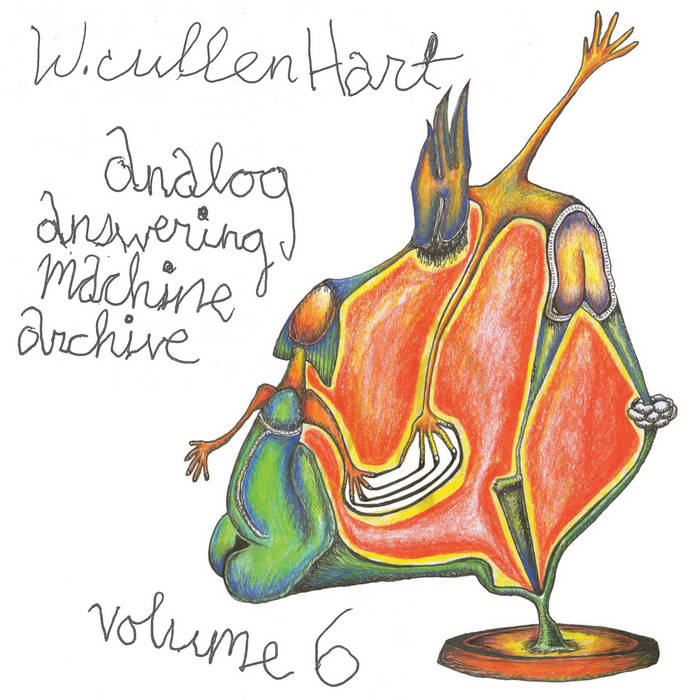 I can’t quite remember the first time I met Will Hart (known professionally as W. Cullen Hart), but my early interactions with him were distinct and profound. It was 1993 or thereabouts. Downtown Athens was still sleepy, rent was cheap, and a good time was to be had pretty much anywhere. Will was from the college town of Ruston, Louisiana; I had just moved from Amish country in Pennsylvania and looking for a new environment to call home.
When I’d bump into Will in those early days, he was obsessed with Marcel Duchamp and the theater of the absurd. As a Monty Python, Syd Barrett and Bonzo Dog Band obsessive, I was attracted to his demented yelps, stream-of-consciousness word vomit, and playful gurgling, which punctuated any time we’d run into each other. Wherever I was, I’d bump into Will along with his Synthetic Flying Machine bandmates Bill Doss and Jeff Mangum. When the three of them walked around, it was hard to imagine that this group of ragtag hobos would soon turn Athens on its collective ear and usher in a new era to this already hallowed town.
Soon after becoming slightly obsessed with Will’s musical journey, my trusty Sony D6 recorded every show The Olivia Tremor Control would play. Frijoleros. The Downstairs. Club Fred. Hoyt Street North. The Shoebox. Random house parties. Amidst this (and my enviable university job), Will would call my answering machine and leave messages designed almost exclusively to entertain us both. Fortunately for my dorky ass, I had the foresight to continually preserve those fuzzy mini-cassette recordings onto a “Will’s Answering Machine Greatest Hits” cassette. All told, it was probably close to twenty messages and always a fun and inside joke between ourselves. Will went onto great acclaim for his work with The Olivias, and subsequently Circulatory System, but we were (and continue to be) the best of friends.
Flash ahead to the peak days of the pandemic and I was desperately looking for things to do around the house to prevent me from going insane. I started sifting through box upon box of old tape recordings I made from my time in Athens. There, at the end of a live show by the Oblivians at the Atomic Music Hall 1996, I stumbled across the collection of audio you hear on this record.
Several months ago, I found myself at Will and his wife Kelly’s house and mentioned having rediscovered those answering machine messages, and Will just tittered. Back in the ‘90s, we both would derisively giggle over those messages for a brief moment and soldier on. And here we are now. Both middle aged. Both a bit softer. However, our love of the absurd still guides us both. So I wanted to make this release special for fans of Will. All of the art (less the type and back cover photo) is from my personal collection of Brother Will’s materials that I’ve never thrown away after almost 30 years of being the best of buddies. Additionally, as an exclusive present, each record comes with a one-of-a-kind drawing by Will. Let’s just say that there’s never been a shortage of stray art strewn upon his living room floor.
Production wise, I digitized the recordings, I had my good friend Jason Henn from Honey Radar edit the audio and had it subsequently mastered by Drew Crumbaugh. Thank you, Jason. Thank you, Drew. The records themselves were individually cut at Little Elephant. Thank you, Little Elephant.
As I’ve discovered over the years, my audio archive is ridiculously vast (or vastly ridiculous, take your pick), and I can only hope that future releases will continue to come out when the urge hits. Having a friend like Will Hart is the dream of a lifetime, but to share these glimpses of nascent absurdity from him is equally a thrill. I love you, Will, and thank you for trusting me with this truly silly record.
— Henry H. Owings, November 8, 2022

Answering machine messages from 1994-96 culled from the ridiculously exhaustive (and somewhat exhaustively ridiculous) audio archive that was recorded & digitized by Henry H. Owings. (What a dope.)
Edited by Jason Henn
Mastered by Drew Crumbaugh
Singles individually cut at Little Elephant
All artwork by W. Cullen Hart
Back cover photo by Robert Schneider
Inset photo of Henry & Will at the the first Terrastock, Providence 1997 courtesy the Chunklet archive

A Chunklet Industries Release
All Rights Reserved
Manufactured and Assembled in the U.S.A.
CHK7082